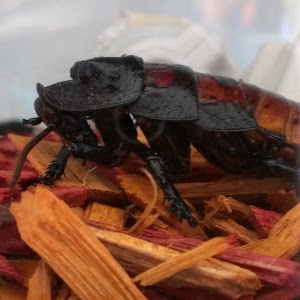 I have three Madagascar Hissing Cockroaches. I named them Hissbliss, Hisser and Hissy. Hissbliss is the big one. He also has an antenna cut off. Hisser has the longest antennae. Hissy has short antennae. To people who love bugs: super cool! To people who don't: super scary. The bug guy gave them to me. 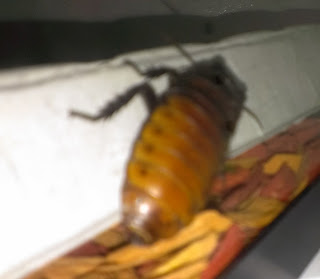 The bug guy's name is Bruce. He does little presentations about bugs. He has more hissing cockroaches. He has cecropia moth caterpillars with little stiff colorful mace balls all over their backs. They don't hurt you. None of the things the bug guy has can hurt you. Except the terantula and the scorpion. One of the terantulas was crabby, so we had to hold its cage. The other one we got to hold out of its cage. Why would we get to hold the scorpion out of its cage? The bug guy also has giant millepedes.

I feed my hissers a mixture of dog food, cat food and fish food. You can feed them most pet food, vegetables, and fruits.

I built a playground for my hissing cockroaches. It has little hideouts and they like to hide. I built a big hideout to go along with the little hideouts. I call it climbers and hiders. The end. That's a true story.